If you have ancestors who lived in Virginia, be sure you check out the Library of Virginia’s “Virginia Memory” project.  Specifically, look at the project called “Chancery Records Index.” 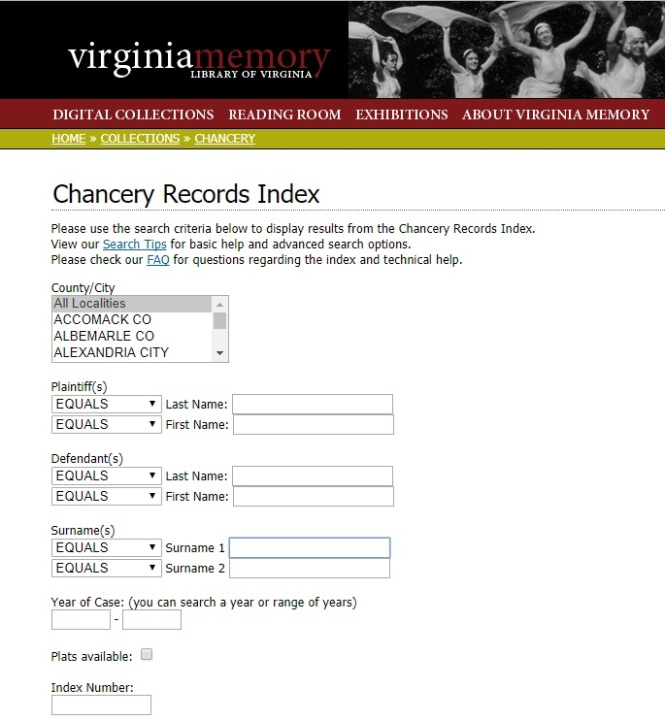 Chancery Court records are something like the Judge Judy of the 17th and 18th century.  Family members or neighbors might have a dispute over a deed, other purchase or a legacy from an ancestor, and the courts would need to step in and decide the outcome.  Some of these cases are pretty mundane, but some are full of intimate details and names of family members.

To highlight this excellent project by the Library of Virginia in Richmond, I want to share a disturbing, yet amazing document which provides not only ancestral information–some of which has never been published–but also a look at society’s conscience during the first half of the 1800s.

It is no shocker that our ancestors owned slaves in the early 1800s.  Virginia was a Southern state, and slaves were part of the economy.  It is tough sometimes, and even heart-wrenching, when you read about a Black person being sold, and a price attached to his or her name.  The line that always, always make me cringe, and it is often written in these old wills–“her and her increase.”  A slave woman is the “her” and “her increase” means her children.  A man could bequeath a human being to his own child.  If that slave was a woman, she, her children, and  her future children, could be passed down as a legacy.

This record is 395 pages long.  Not all the cases contain that many pages, but if you have a large case, surely something intriguing will be found.

I’ll give you the gist of the dispute, as best I gathered.  Anderson McCormack owed a debt.  The sheriff came to take Matilda, a slave woman, as payment for that debt.  The catch–Matilda did not yet belong to Anderson, she was still his father’s property.  So, Anderson sued his father for possession under the belief that Matilda was his inheritance from his grandfather, James Cornute/Cornutt (died 1797), through his mother, Polly Cornute McCormack.  Another catch was that Matilda was not actually part of Cornute’s estate, but was purchased by William McCormack at the sale of Cornute’s property.  (I believe she was actually another Cornute’s property, but to make equitable division of the estate, some wheeling and dealing occurred between the children, in-laws, and the next generation.  Nothwithstanding, though, William McCormack had promised Matilda to his first wife’s children–John, Anderson, and Frances “Franky,” wife of Abraham Showalter–as their inheritance AFTER the “Cornute debt” was paid.

This was not an easy case to decide.  Was Matilda a gift or a sale to the son?  In the meantime, William sold Matilda to his grandsons, children of Franky.  William died.  Anderson sued his nephews, and there were many depositions taken.

Page 160 is a genealogical find that has been nearly a decade-long search by me, and well over 100 year search for researchers of James Cornute’s family.  In a deposition by Archelous Cornett, taken on 13 April, 1841, at home of John Cornutt, Grayson County, Virginia, we learn that William McCormack attended the sale of James Cornute on 12 November, 1819.  If Cornute died before 6 December, 1796 (date of inventory in Montgomery County) why was the sale so many years later?  Well, James left a widow, Sarah, and she got a life estate on a parcel of land in Montgomery County and personal property.  The children could not get their portion of the father’s estate until the “Old Lady” (as she was called on page 214) passed away.

Fortunately for genealogists, the questioner asked who the other heirs of James Cornute were–and Archelous names his father and eight aunts and uncles.  This complete list of James Cornute’s children has never been published.  Some we knew from other records, some we guessed by age and proximity, one we thought isn’t a child, and two have never been mentioned in any genealogy to date. 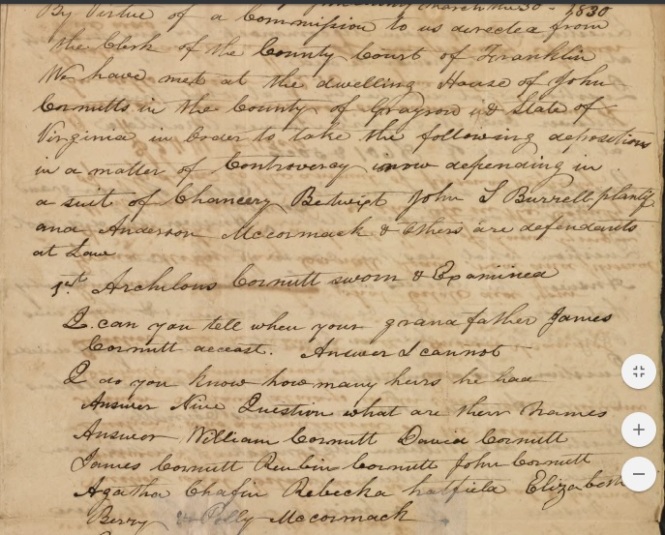 This is a great find.  I don’t know if I can explain how amazing it is for a researcher.  But this isn’t the only great find.

I may be romanticizing here, and I in no way think slavery was a moral institution, but I know not all slave owners were evil people.  Perhaps, in this case, Matilda was being protected by the Cornetts.  They did not want to lose her–obviously, she was valuable property, but she was also the mother of 11 children. 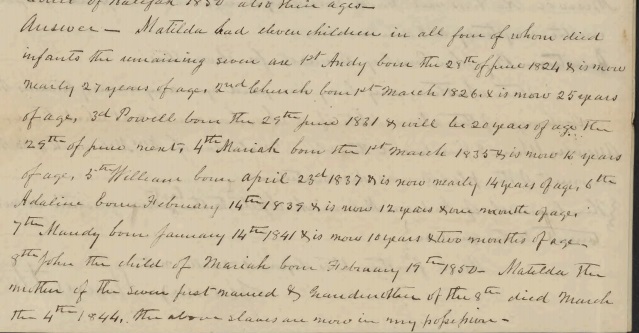 This page gives the names of three generations of African American people before the Civil War.  I have not done very much African American genealogy, but I have heard that because of slavery, tracing Black ancestors can be difficult.  This record gives the names for seven of 11 children (four dying in infancy) and their birthdates, plus the birthdate of a grandson.  Matilda’s death date is given–4 March, 1844.

I would like to think that the McCormacks were trying to keep Matilda’s family together.  That could be naiveté at worst; wishful thinking at best.  In this time period–Matilda and her children were property.  Matilda had 11 children.  The first record above was Andy, born 1824.  He might not have been her first child.  Her last was Mandy, born 1841.  Matilda may have had one more before her death in 1844; Mandy was only three-years-old. Mariah, born in 1835, had son John, born in 1850; Mariah was 15 when he was born.  It’s probable that Matilda’s first child was born when she was 14 or 15–if so, she was mid-30s when she died.

Matilda was cared for!  A receipt included in the chancery file shows that Marry Wysong tended Andrew and Church in 1838 for fever, and in 1844, she waited “on Matilda while sick.”  Marry’s services for both years totaled $5.75.

Matilda was buried with dignity.  AND…she may have been either a very tall woman, or perhaps heavy set.  Lewis Wysong (son of Marry above) was paid for making Matilda’s “large coffin” with a cherry top.  The casket cost $4.00.

With these documents one can further the family tree, study the economics of 19th century Virginia, and research the effects of slavery.  Continued research might take one to the 1820 census of Franklin County, where William McCormack is listed with four slaves.  He purchased Matilda in 1819, so she was one of them.

Does Matilda have descendants living today? Would they be excited to see the birth records of her children, just like the Cornutts today are excited to see the names of James Cornute’s children?  I think so.  These records give Matilda a life, a description, and, in  away, immortality.

I hope by some chance, one of Matilda’s descendants will do a Google search or such, and find this blog.  I hope that many Cornett/Cornutt researchers will be drawn here on their quest to fill out a pedigree chart.

This record has not been referenced or passed around by researchers.  It was probably lost to us until the Library of Virginia digitized it and put it online–available to all, for free.  The “Virginia Memory” project holds treasures for everyone with a link to Virginia.  Try searching your family name at the Chancery Records Index today.