Last week, I posted an article “Marriage Record Deciphered: Jeremiah Hayes to Jane Moore, 1789 Bourbon, KY” that had been misunderstood and created a relationship that was false–some thought it showed a father and mother to a daughter, when it reads that it was just a mother and daughter, and the man must have been a brother (or other male relative), not the father. 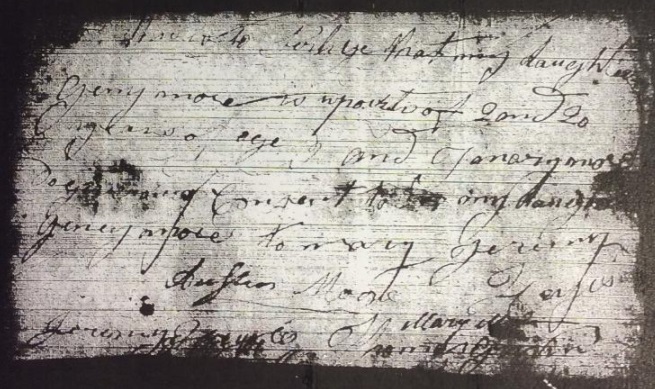 I was able to determine the text based on the language used in similar records.  In the 34 years I have been researching my family tree, I have read a lot of marriage bonds, licenses, registers, and returns.  Each of these types of records provides different amounts of information.  When I can find a marriage consent–the actual scrap of paper the parents wrote on to allow their child to wed–I feel I have found the pot-of-gold at the end of a rainbow.  Consents tell you who the parents are!  And sometimes, they give you other details of relationships.

My initial stab at transcribing this was a bit off.

It took some imagination to get “Honorable clerk” out of the first part.  Most of these types of records have some kind of salutation to the clerk. So, that was my assumption.  “Honorable clerk ye”?  In actuality, there was no salute.  Mary More’s action here was to prove her daughter’s age.  Ah…she was certifying the age!

Take a look at this record,

Sir–the expected salutation–“this is to certify.”  This certifies that these words were used by people of the time.  I was on the right track.

In the third line of the 1789 record, I did think there were indications of two people writing.  Did it say “I and I mary more”?  That did not make sense. But looking at the capital I before Mary, it was not the same as the possible I before the word And.  I finally settled that this was a grammatical mark made by the writer to divide the proof of age from the consent.

Another record, for another couple, shows the wording for a father and mother who are definitely both named. 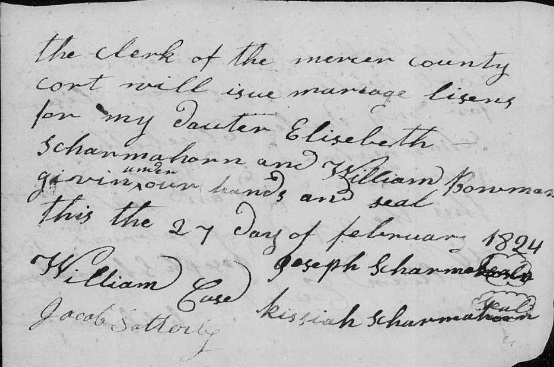 I see that this record says “my daughter,” but it was given under “our hands.”  If the 1789 Hayes-Moore document were truly written by Austin and Mary Moore, I believe it would also say “our” somewhere.  Furthermore, the names of the writers are almost always on the bottom right, and the names of witnesses are almost always on the bottom left.  In the Hayes-Moore document, Austin’s name is to the left.

One more consent to consider.

Since genealogy ends with -logy, it is a study, a science.  The process of the scientific method follows well in genealogical proof.  A question is asked, a hypothesis made, and then testing the hypothesis begins.

In testing of this hypothesis, several facts came up.  First, there were consistent and positively identified records to show this Austin Moore was in Bourbon, Lincoln, and Mercer Counties, Kentucky, and then Decatur County, Indiana.  All those records point to a birth in 1760.  That would make him too young to be Jane Moore Hayes’s father.

Second, a Mary Moore was listed next to or nearby Austin in tax lists of Bourbon and Mercer Counties. The earliest was a 1788 Bourbon tax list, so Mary was a widow by 1788.  (A 1786 Fayette County, Pennsylvania tax list shows an Austin and Mary listed there–so she may have been widowed even earlier.)  Mary was a widow when Jane married Jeremiah Hayes, therefore she could not be the wife of Austin Moore.

All other possible husbands of Mary were debunked, specifically a Peter Moore who died in 1794.  It appears that the name Peter Moore and date of death 1794 derive from a mistake made in an old genealogy forum post.  The man who died in 1794 Bourbon County was Thomas Moore–not Peter–and his wife, Mary, was pregnant!  Those details are in the will. (Bourbon Will Book A, p. 193.)  If Mary More, mother of Jane and Austin, had children as early as 1760, and probably one or two before that, she must have been in her 50s by 1794.  With Austin born in 1760, if he were her first child, and she was just 15, her birth would have been about 1745–I believe she was born before this–but the point is, she would be 49 or older in 1794, and past child-bearing age.

Often, one record does not answer a genealogist’s question. Several records must be consulted and analyzed to come to a conclusion.  To confirm the transcription of this 1789 marriage consent, I had to check other marriages of the time period, tax lists and even deed records that might show the deceased husband.  That, plus many years of experience reading similar records, a correct transcription was made.  At least, I hope it was.

Some helpful sites when researching Bourbon County, Kentucky, marriages are Familysearch.org.  Familysearch mostly just links to images of a previously published list of marriage records.  For actual images of some of the original records, go to  http://bourboncoky.info/index.html . This site is coordinated by Crystal Dingler, and references the work of Janet Pease–a genealogists whose books I have used since my first day of research somewhere back in 1984 at the Schuyler Jail Museum, Rushville, Illinois.

Always try to acquire the original document.  A big thank you to Rebecca Wooten,  a new friend and researcher, who located the original of the Hayes-Moore records and sent them to me.