No one told me it was about ancestors! I do recall Ancestry.com plugging it on their website, but did not make the connection.

I also did not know much about Dia de los Muertos, or Day of the Dead, other than some images in a James Bond movie and some decorations at the stores. 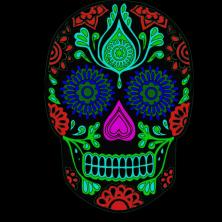 One idea from the movie that struck me the most–and even my six-year-old son–was that the ancestors in the spirit world could not return to visit the living if they had been forgotten. Once forgotten, the ancestor disappeared from the spirit world. In the story, a boy’s great-great-grandfather was never mentioned by his wife and children, and his name was forgotten. No pictures of him existed. Only one old woman, Coco, remembered him, and she was losing her memory because of great age.

How many of my ancestors have been forgotten? Most of my cousins cannot recite their lineage like I can–I work with it daily–but they do hear stories I have shared at reunions.  Perhaps these stories keep those ancestors alive in our minds. But there are many ancestors that I do not know…they have been lost to us over time…but sometimes, THEY GET FOUND!

In the last few years, I have researched to correct mistakes in my family tree. Names of ancestors that were mixed up or wrong. One of the first corrections was Rebecca Stabler Billingsley, wife of James Billingsley, a War of 1812 solider who died in 1814. Looking through some other family books, I learned she was really Rebecca McClung–not Stabler! Well, that explained why I was not finding her in any Stabler records! That mistake was made in 1936, and repeated for about 60 years until I found the right information in the 1990s. Most people have her corrected in their trees. 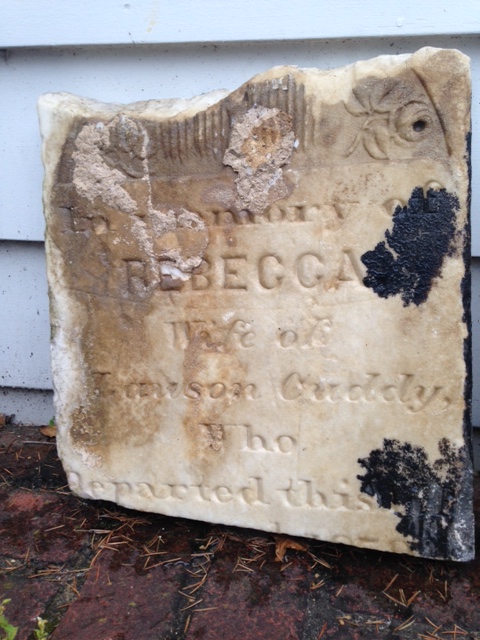 A couple of years ago, someone sent us a picture of her tombstone–what was left of it–which had been part of a sidewalk. You are not forgotten! Welcome back Rebecca.
In 2008, my grandmother’s cousin, Rick Phillips, took a y-DNA test to help us link our Phillips family to any other Phillips family. We were stuck at our ancestor, Asahel Phillips. When the results came in, we did match a couple of men–but they were also stuck, at about the same time period. Six years later, an unexpected y-DNA match led us to a will in Loudoun County, Virginia. The published versions of this will had named a son, Israel, but that son was really Asael, which we spell Asahel. We found his father and mother’s names–Benjamin and Rhoda Phillips. Welcome back, Benjamin and Rhoda.
Several years ago, my cousins and researcher extraordinaire, Denise Hardnack, tackled finding the father of our ancestor, Edward Page Morris. Someone had said it was Joseph…or Joshua…or Joseph Joshua…but the records did not match up to make that work. I knew about a divorce in 1831 between a man married to a Sarah Morris–but it did not seem to work out–that woman was a Morris when she married the other Mr. Morris. Denise found the divorce records, and we were on the right track. Our ancestor’s mother, Sarah Wolfe had married a Jacob Morris. He died, and she married Endless Morris–the father of Edward Page Morris. We knew his name–and we found out he was a drunken and abusive husband who deserted his family. I bet Sarah Wolfe Morris forbade any of the family to even mention his name (although one grandson was later named Endless) Good or bad, his name was lost to us for over 200 years! Welcome back, Endless–hope you have shaped up a bit!

Three years ago, I started corresponding with Terry Lehman, administrator of the McAtee DNA Project. We had been brick-walled at the parents of Daniel McAtee. Some people had made guesses–possibly an Abednego of Rush County, Indiana, but probate records show that that Abednego had no children–he could not be the father. Furthermore, the information about this Abednego said he married at 14 in North Carolina. That did not match with the customs and laws of the time. These North Carolina McAtees from Rowan County were said to be the children of John McAtee and Nancy Wade. Careful research, locating original records, and reverse-engineering the research of J. W. Robling, uncovered that the names John and Nancy were from the McCarty family, not the McAtees. Records uncovered another, older, Abednego McAtee and his brother, Edmund McAtee, in Rowan County. Then, with some DNA matching, and records in Kentucky, I was able to ascertain that Daniel McAtee was the son of this older Abednego, and a wife named Margaret Boardman. Welcome back, Abednego and Margaret.
Most recently, my fellow researcher, Karyn Greenstreet, and I uncovered the true name of an ancestor who had been a brick wall for researchers for over 50 years. So many people have looked for information on Seperate Hendrickson, b. 1737 in Amherst County, Virginia. The problems: there were no records before 1804 naming a Seperate Hendrickson–and they were for younger men; there were Hendricksons in Amherst County, Virginia, but they were not from our family. II wondered: Did Seperate Hendrickson really exist? The answer, no! Karyn found a 1787 inventory list for a John Hendrickson who died in Nelson County, Kentucky (but at the time it was still part of Virginia). With that information, I found a court order for taking the inventory and with it was a record transferring the administration of the estate of John Hendrickson from his widow to Seperate Case. The pieces were all there, but the previous research had them in the wrong places. Now, we know our ancestor’s name was John Hendrickson. Along the way, we found a marriage consent signed by Eve Hendrickson, a widow. Welcome back, John Hendrickson–we know your name, and you are remembered.

I like finding forgotten ancestors.  It seems fitting to welcome them back on Dia de Los Muertos.  Happy “Day of the Dead” to you all.